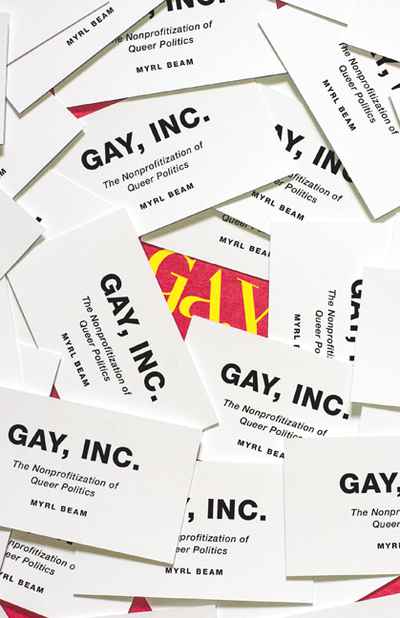 A bold and provocative look at how the nonprofit sphere\u2019s expansion has helped-and hindered-the LGBT cause.

What if the very structure on which social movements rely, the nonprofit system, is reinforcing the inequalities activists seek to eliminate? That is the question at the heart of this bold reassessment of the system\u2019s massive expansion since the mid-1960s. Focusing on the LGBT movement, Myrl Beam argues that the conservative turn in queer movement politics, as exemplified by the shift toward marriage and legal equality, is due mostly to the movement\u2019s embrace of the nonprofit structure.

Based on oral histories as well as archival research, and drawing on the author\u2019s own extensive activist work, Gay, Inc. presents four compelling case studies. Beam looks at how people at LGBT nonprofits in Minneapolis and Chicago grapple with the contradictions between radical queer social movements and their institutionalized iterations. Through interview subjects\u2019 incisive, funny, and heartbreaking commentaries, Beam exposes a complex world of committed people doing the best they can to effect change, and the flawed structures in which they participate, rail against, ignore, and make do.

Providing a critical look at a social formation whose sanctified place in the national imagination has for too long gone unquestioned, Gay, Inc. marks a significant contribution to scholarship on sexuality, neoliberalism, and social movements.