Documents on Australian Foreign Policy: Australia and the World, 1920—1930 Edited by James Cotton 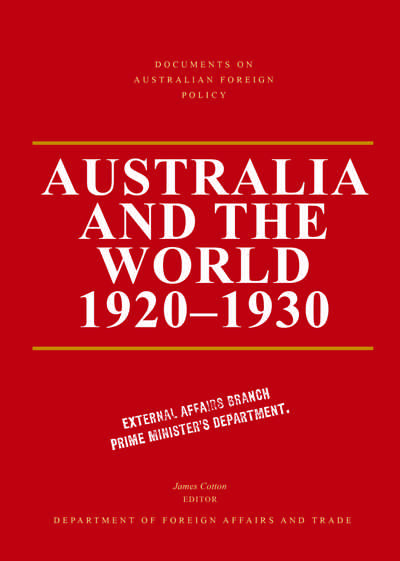 Documents on Australian Foreign Policy: Australia and the World, 1920—1930
Edited by James Cotton

When Australia became a foundation member of the League of Nations in 1919, our engagement with the world moved beyond the familiar confines of the British Empire. Leaders and officials had to grapple with conceiving and formulating a foreign policy that would be scrutinised by the new global institutions at Geneva. Meanwhile, in relations with London and as a consequence of World War One, Australia's position was in transition as the that Empire transformed into an association of 'autonomous communities' according to the Balfour formula of 1926. This volume charts and documents the first decade of these efforts.

This volume, commissioned by the Department of Foreign Affairs and Trade in the Documents on Australian Foreign Policy series, is the first comprehensive survey of Australia's approach to the world in the 1920s. It is based on a thorough review of archival materials and includes many items not previously accessible or discussed in the historical literature. Framed by extended editorial essays, it provides the evidence necessary to review the evolving relationship with London and to reassess the contributions of prime ministers W. M. Hughes, S. M. Bruce and James Scullin. It also contains the first representative survey of the contribution of officials to policy formulation, and documents important initiatives in foreign and trade policy.