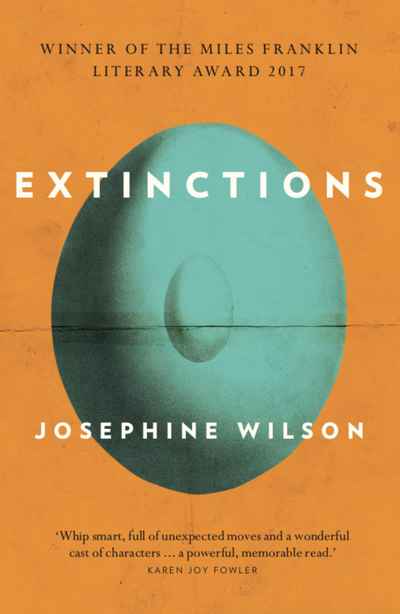 WINNER of the Dorothy Hewett Award for an Unpublished Manuscript

WINNER of the Colin Roderick Award 2017

SHORTLISTED for the Prime Minister's Award for Fiction

Professor Frederick Lothian, retired engineer, world expert on concrete and connoisseur of modernist design, has quarantined himself from life by moving to a retirement village. His wife, Martha, is dead and his two adult children are lost to him in their own ways. Surrounded and obstructed by the debris of his life — objects he has collected over many years and tells himself he is keeping for his daughter — he is determined to be miserable, but is tired of his existence and of the life he has chosen.

When a series of unfortunate incidents forces him and his sharp-eyed neighbour, Jan, together, Frederick Lothian has the chance to realise the damage done by the accumulation of a lifetime's secrets and lies, and to comprehend his own shortcomings. Can he finally build something meaningful for the ones he loves?

'In Extinctions, a compassionate and unapologetically intelligent novel, Josephine Wilson explores ageing, adoption, grief and remorse, empathy and self-centredness...The novel is also a meditation on survival: on what people carry, on how they cope, and on why they might, after so much putting their head in the sand, come to the decision to engage, and even change. ' — The 2017 Miles Franklin Literary Award Judges Comments

'Wilson is never at a loss for words. She wields the English language sometimes like a surgical instrument, sometimes like a weapon, but always with complete mastery of allusion and resonance.' — Gillian Dooley, Australian Book Review

'Josephine Wilson's paragraphs and sentences have a rounded shape, in contrast to the currently fashionable way of writing, which tends to jagged, broken sentences. Her style encourages readers to savour each image and insight as it is revealed, without feeling that the narrative is constantly rushing forward to the next piece of "action". Some would call this style old-fashioned; in my view it has a lot going for it.' — Dorothy Johnston, Sydney Morning Herald