Pathfinders: A history of Aboriginal trackers in NSW Michael Bennett 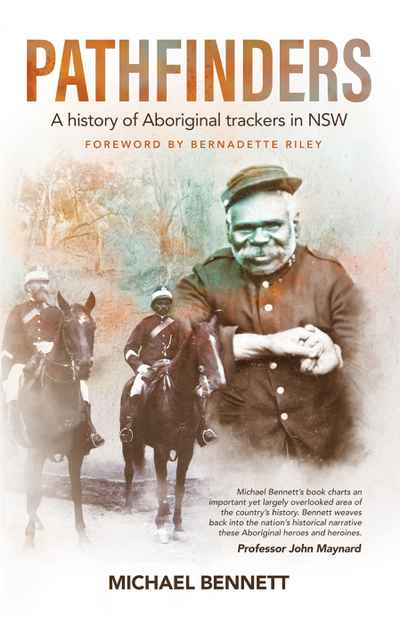 Pathfinders: A history of Aboriginal trackers in NSW
Michael Bennett

There are few Aboriginal icons in White Australia history.

From the explorer to the pioneer, the swagman to the drover's wife, with a few bushrangers for good measure, Europeans play all the leading roles. A rare exception is the redoubtable tracker. With skills passed down over millennia, trackers could trace the movements of people across vast swathes of country. Celebrated as saviours of lost children and disoriented adults, and finders of missing livestock, they were also cursed by robbers on the run.

Trackers live in the collective memory as one of the few examples of Aboriginal people's skills being sought after in colonial society. In New South Wales alone, more than a thousand Aboriginal men and a smaller number of women toiled for authorities across the state after 1862. This book tells the often unlikely stories of trackers including Billy Bogan, Jimmy Governor, Tommy Gordon, Frank Williams and Alec Riley.

Through his work on native title claims, historian Michael Bennett realised that the role of trackers – and how they moved between two worlds – has been largely  unacknowledged. His important book reveals that their work grew out of traditional society and was sustained by the vast family networks that endure to this day. Pathfinders brings the skilled and diverse work of trackers not only to the forefront of law enforcement history but to the general shared histories of black and white Australia.

'The word tracker conjures images of the legendary Aboriginal bush experts responsible for bringing criminals to justice and finding people lost in the wild. Michael Bennett's new book is a very welcome addition. The book charts an important though largely overlooked area of the country's history. Aboriginal trackers hold a mythical yet obscure presence in the history of the continent. Bennett weaves back into the nation's historical narrative these Aboriginal heroes and heroines.' — Professor John Maynard