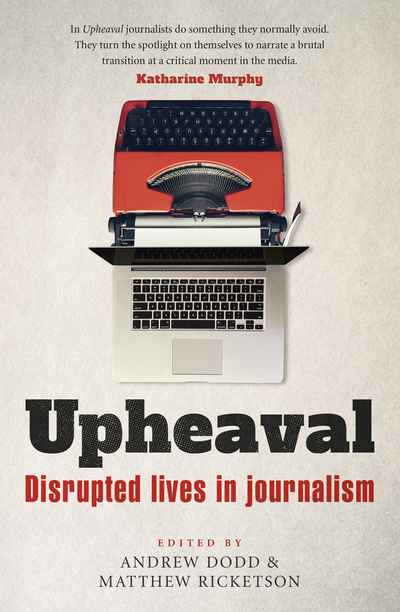 ‘Newsrooms were these crazy universities, full of experts on the strangest things, people with real understanding and experience of things that mattered, places where you could ask anybody anything, though you might get your head bitten off if you interrupted someone on deadline. You’ve also got company, noise, yahooing and jokes. I discovered I’m made for that kind of place.’ — David Marr

Newsrooms, the engine rooms of reporting, have shrunk. A generation of journalists has borne witness to seismic changes in the media. Sharing stories from more than 50 Australian journalists – including Amanda Meade, David Marr and Flip Prior – Upheaval reveals the highs and the lows of those who were there to see it all.

They show us life inside frenetic and vibrant newsrooms at the peak of their influence, and the difficulties of adapting to ever-accelerating news cycles with fewer resources. Some left journalism altogether while others stayed in the media — or sought to reinvent it. Normally the ones telling other people’s stories, in Upheaval journalists share the rawness of losing their own job or watching others lose theirs. They reveal their anxieties and hopes for the industry’s future and their commitment to reporting news that matters.

'In Upheaval journalists do something they normally avoid. They turn the spotlight on themselves and their industry. They narrate a brutal transition at a critical moment in the media. This oral history documents the culture of Australian journalism before the internet – extemporising, sexist, booze-fuelled and brash – and reveals the private pain of the digital dislocation for many journalism lifers who had to reshape their professional identities. Upheaval puts readers in the newsroom as the rivers of gold dried up.' — Katharine Murphy

'Essential reading for those who care about journalism and its struggle to survive. This book captures the essence of what it is to be a reporter amid tectonic shifts in the media and in the world that we strive to make sense of for our audiences. Anyone who follows the news and politics will be absorbed by Upheaval.' — Nick McKenzie