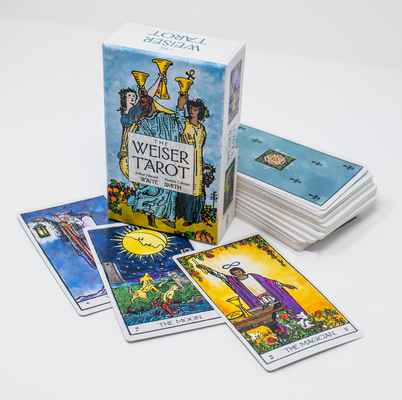 A fresh and vibrant reimagining of the classic 1909 Waite-Smith tarot.

The Weiser Tarot is a new edition of the most popular and influential Tarot art ever created, the Rider-Waite-Smith deck, first published in 1909. The cards have been newly repainted—while, of course, preserving Pamela Colman Smith’s original line art—creating a fresh, flowing aesthetic. Additionally, the cards provide Hebrew and astrological correspondences to the Major Arcana—not included in the original Rider-Waite-Smith deck—for those seekers who have interest in Qabalah and astrology.

The Weiser Tarot was created to speak to your own personal Tarot needs and desires. Whether you are new to the Tarot or a seasoned card reader, you can use The Weiser Tarot for divination, fortune-telling, self-transformation, spellcasting, or any other purpose.

'There have been many re-workings of the classic Rider deck in recent years. This may be the best.' — Rachel Pollack, author of 78 Degrees of Wisdom