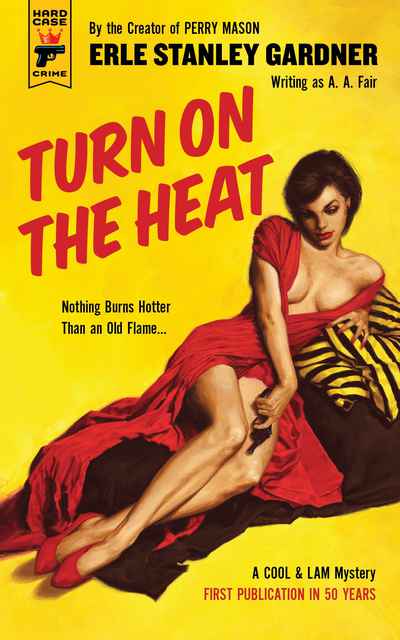 Erle Stanley Gardner was not just the creator of PERRY MASON – at the time of his death, he was the best-selling American author of all time, with hundreds of millions of books in print. Among those books were the 29 cases of the brash, irresistible detective team of Bertha Cool and Donald Lam. Last year, Hard Case Crime brought out the first new Cool and Lam novel in decades, THE KNIFE SLIPPED, lost for 77 years after Gardner's publisher refused it. Now, we're bringing you the book Gardner wrote to replace it, often considered the best in the series: TURN ON THE HEAT. Hired by a mysterious "Mr. Smith" to find a woman who vanished 21 years earlier, Donald Lam finds himself facing a sadistic cop, a desperate showgirl, a duplicitous client, and one very dogged (and beautiful) newspaper reporter – while Bertha Cool's attempts to cut herself in on this lucrative opportunity land them both hip-deep in murder…

One of the best-selling authors of all time, Erle Stanley Gardner's greatest creations include crusading attorney Perry Mason (star of more than eighty novels, a TV series and TV movies) and the hardboiled detective team of Bertha Cool and Donald Lam, who appeared in more than two dozen adventures. An attorney himself, Gardner also founded the Court of Last Resort, a group that investigated criminal cases they believed had ended in wrong convictions.