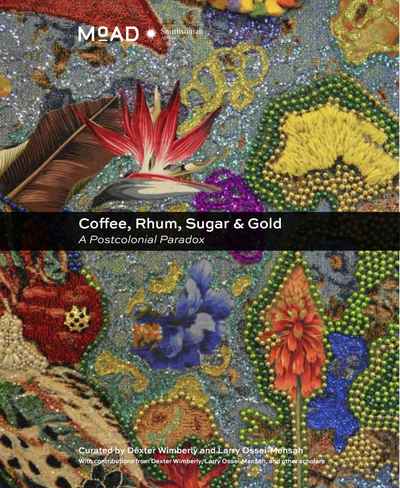 Coffee, Rhum, Sugar & Gold: A Postcolonial Paradox, which looks at the legacy of European colonialism in the Caribbean through the work of nine contemporary artists — Angel Otero, Adler Guerrier, Phillip Thomas, Leonardo Benzant, Lucia Hierro, Lavar Munroe, Andrea Chung, Ebony Patterson, and Firelei Báez — is inspired by some of the core products that have historically been produced in and exported from the Caribbean to the rest of the world.

It explores the complexity of the "postcolonialism paradox," in which some colonisers felt superior, noble, and productive, as they claimed territory for themselves and their posterity while subjugating indigenous people and exploiting their land. The historic toll of colonialism remains evident in the lives of hundreds of millions of people who are descended from those who suffered, sacrificed, and even gained from its expansion and apparent decline.

Whether connected to the Caribbean by birth or focused on the region by choice, the artists use their work as a means of examining the relationship between the power structure, those who are controlled by it, those who benefit from it, and those who actively seek to liberate themselves from it.