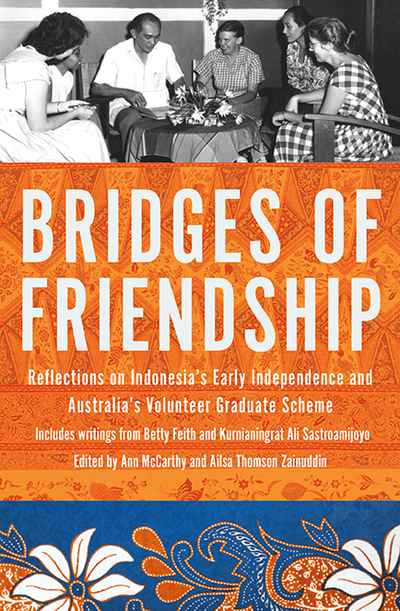 Bridges of Friendship unveils personal ties between Indonesians and Australians in the early days of the Indonesian Republic. At the same time it reveals an important chapter in the history of international development and volunteering, and provides insight into Indonesian-Australian relations.

Betty Feith, co-founder of the Volunteer Graduate Scheme in Indonesia – an initiative under which Australian graduates were employed in the Indonesian civil service – draws on both first-hand experience and an array of archival documents to narrate a history of the Scheme from 1950 to 1963. The VGS pioneered the concept of international volunteering as we understand it today. Feith's nuanced and insightful narrative demonstrates the ideals of equality and support for the newly formed Indonesian Republic that were at the heart of the Scheme.

The reminiscences of Kurnianingrat Ali Sastroamijoyo – an educator who worked extensively in English language teaching and training, and who took an active part in the Indonesian Revolution – include a fascinating and moving account of daily life in occupied Yogyakarta during the struggle for independence against the Dutch. Kurnianingrat illuminates Indonesian social and cultural history at this critical time for the nation.

A common thread across these two accounts is the friendship of Kurnianingrat and Harumani Rudolph-Sudirdjo with Australian volunteer graduates Feith and Ailsa Thomson Zainuddin: all four women worked together at the English Language Inspectorate in Jakarta in the mid-1950s. Extracts from correspondence, in a final section, illustrate the mutual interests and lasting connections and commitments of this circle of friends.

Taken as a whole, Bridges of Friendship suggests the depth of human connection between Australia and Indonesia, fostered by the international spirit common to both the Indonesian Revolution and the Volunteer Graduate Scheme.