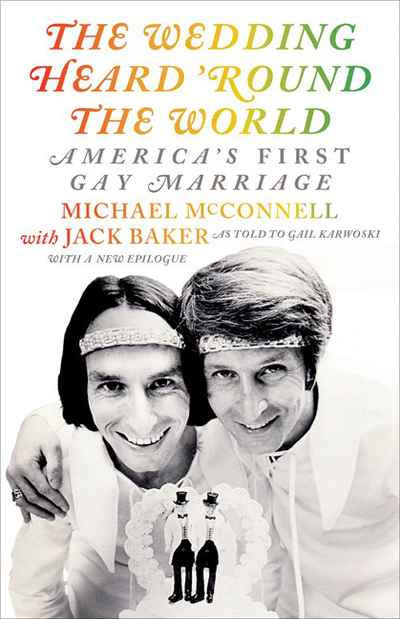 On September 3, 1971, Michael McConnell and Jack Baker exchanged vows in the first legal same-sex wedding in the United States. Their remarkable story is told here for the first time—a unique account of the passion and energy of the gay liberation movement in the sixties and seventies.

At the dawn of the modern gay movement (while New York's Stonewall riots and San Francisco's emerging political activism bloomed), these two young men insisted on making their commitment a legal reality. They were already crusaders for gay rights: Jack had twice been elected the University of Minnesota's student president—the first openly gay university student president in the country, an election reported by Walter Cronkite on network TV news. They were featured in Look magazine's special issue about the American family and received letters of support from around the world.

The couple navigated complex procedures to obtain a state-issued marriage license. Their ceremony was conducted by a Methodist minister in a friend's tiny Minneapolis apartment. Wearing matching white pantsuits, exchanging custom-designed rings, and sharing a tiered wedding cake, Michael and Jack celebrated their historic marriage. After reciting their vows, they sealed their promise to love and honor each other with a kiss and a signed marriage certificate.

Repercussions were immediate: Michael's job offer at the University of Minnesota was rescinded, leading him to wage a battle against job discrimination with the help of the Minnesota Civil Liberties Union. The couple eventually reached the U.S. Supreme Court with two precedent-setting cases.

Michael and Jack have retired from the public spotlight, but after four decades their marriage is still their joy and comfort. Living quietly in a Minneapolis bungalow, they exemplify a contemporary version of the American dream. Only now, with marriage equality in the headlines and the Supreme Court decision to make love the law of the land, are they willing to tell the entire story of their groundbreaking experiences. TIME magazine listed the twenty-five most influential marriages of all time and included Michael and Jack, and they were recently profiled in a cover story in the Sunday New York Times. Their long campaign for marriage equality and insistence on equal rights for all citizens is a model for advocates of social justice and an inspiration for everyone who struggles for acceptance in a less-than-equal world.

"A beautiful, well-written love story that is heartrending and ultimately heartwarming. Thank you, Michael and Jack, for opening the doors for the rest of us, for your integrity, for proving, yes: Love wins!"—Robert Alexander, New York Times bestselling author of The Kitchen Boy

"In The Wedding Heard 'Round the World, chronicler Gail Langer Karwoski has fashioned a wonderfully compelling told-to story of triumph in the extraordinary lives of Michael McConnell and Jack Baker. A great and memorable read."—Terry Kay, author of To Dance with the White Dog

"The only first-person account by the two visionary men who legally married, shortly after the Stonewall riot, and who recognized the importance of marriage in an era when it was disregarded by society and angrily rejected by gay activists."—Thomas Kraemer, founder, Oregon State University Foundation Magnus Hirschfield Fund

"One of the great love stories of the past century, and one that jump-started the movement for LGBT marriage equality. The librarian and the law student—Mike and Jack—are all-American pioneers. Anyone interested in gay rights—or in romance—should read this book."—William N. Eskridge Jr., Yale Law School

"Please read this very important book about the godfathers of marriage equality, especially if you want to know and appreciate gay history. Their proud, loving lives have always inspired me and my work."—Brian McNaught, author of On Being Gay and Are You Guys Brothers?

"Michael and Jack made history by getting married in 1971—and the letters they received reveal the impact this had on people all over the world. Their story is both universal and unprecedented, offering a riveting look into gay life, love, and activism in the late 1960s and 1970s and the fight for same-sex marriage."—Lisa Vecoli, curator of the Tretter Collection in GLBT Studies, University of Minnesota Libraries