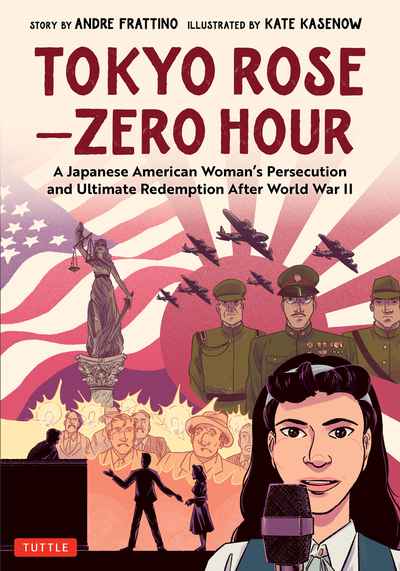 Traitor or hero? Discover the truth behind the legendary Tokyo Rose.

Tokyo Rose: Zero Hour tells the true story of Iva Toguri, a Japanese-American woman who was visiting her relatives in Tokyo shortly before the attack on Pearl Harbor--and became caught up in an unlikely chain of events that made her infamous. She ended up at odds with everyone--her family, her country, Japan, even herself! But was she really guilty?

Trapped in Japan, Iva was refused to renounce her American citizenship. As war raged across the Pacific, she took a job with Radio Tokyo where she was forced to host 'Zero Hour,' aimed at demoralising American troops, in the role of Tokyo Rose, 'The Siren of the Pacific.'

The dramatic events recounted in this story include:

Written by Andre Frattino and illustrated by Kate Kasenow, Tokyo Rose: Zero Hour has an introduction explaining the 'Tokyo Rose' phenomenon and the devastating effects of World War II on Asian-American communities that continue to reverberate.

'An unflinching, eye-opening account on one of the 20th century's most misunderstood figures.' – David Lewis, editorial board member for the International Journal of Comic Art.