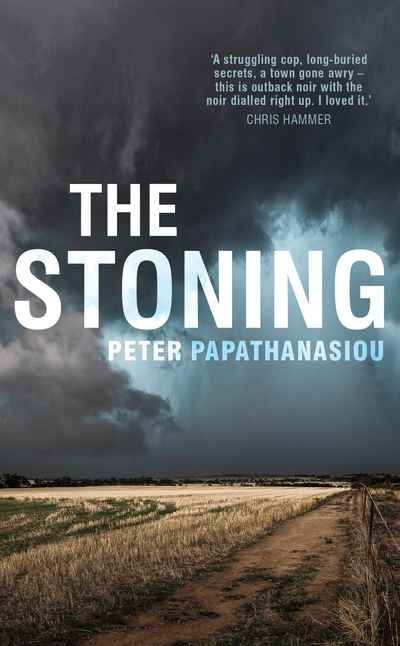 *Longlisted for the ABIA Book Awards 2022: Small Publishers' Adult Book of the Year*

A small outback town wakes to a savage murder.

Molly Abbott, a popular teacher at the local school, is found taped to a tree and stoned to death. Suspicion falls on the refugees at the new detention centre on Cobb’s northern outskirts. Tensions are high between immigrants and some of the town’s residents.

Detective Sergeant Georgios ‘George’ Manolis is despatched to his childhood hometown to investigate. His late father immigrated to Australia in the 1950s, where he was first housed at the detention centre’s predecessor — a migrant camp. He later ran the town’s only milk bar.

Within minutes of George’s arrival, it is clear that Cobb is not the same place he left as a child. The town once thrived, but now it’s disturbingly poor and derelict, with the local police chief it seemingly deserves. As Manolis negotiates his new colleagues’ antagonism and the simmering anger of a community destroyed by alcohol and drugs, the ghosts of his own past flicker to life. His work is his calling, his centre, but now he finds many of the certainties of his life are crumbling.

White skin, black skin, brown skin — everyone is a suspect in this tautly written novel that explores the nature of prejudice and keeps the reader guessing to the last. The Stoning is an atmospheric page-turner, a brilliant crime novel with superb characters, but also a nuanced and penetrating insight into the heart of a country intent on gambling with its soul.

'In the tradition of Sarah Thornton’s Lapse, Chris Hammer’s Scrublands and, of course, Jane Harper’s The Dry, The Stoning grips from its disturbing opening to its high-octane showdown. This book has everything Australian rural noir readers could want: suspicious townsfolk, searing heat and a flawed main character given a case bungled by local law enforcement that seems unlikely to hold up in court. Peter Papathanasiou’s debut novel is a bleak, harrowing look at small-town racism, hypocrisy and intolerance, and an altogether gripping read.' — Fiona Hardy, Books+Publishing

‘A struggling cop, long-buried secrets, a town gone awry—this is outback noir with the noir dialled right up. I loved it.’ — Chris Hammer, bestselling author of Scrublands

‘A crime novel with a difference; gritty and menacing with a terrific sense of place. A highly relevant examination of racism in an outback town.’ — Emma Viskic, author of the Caleb Zelic crime series

‘I was unable to put this book down—it’s utterly compelling. In George Manolis, you have a detective in the tradition of Chandler’s Marlowe, yet entirely right for the times in which we live now – he’s superbly written.’
— Wyl Menmuir, author of The Many, nominated for the 2016 Man Booker Prize