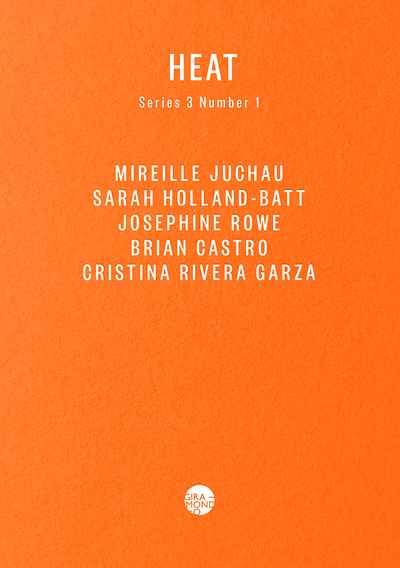 ‘An edgy and enormously influential literary magazine…’ – The Australian

‘A really lively magazine like HEAT can create the occasion for new writing as well as being an outlet for it, a wish on the part of writers to write up to its standard. It makes things happen. It creates its own scene.’ — David Malouf

First published in 1996, HEAT is a literary journal dedicated to publishing Australian and overseas writers of the highest quality. It returns after a decade-long hiatus with a renewed commitment: to challenge convention and spark international exchange. At the core of HEAT is a desire to bring together writing that is powerful, eccentric and skilful. Rather than being guided by a subject or themes, the journal is drawn to depth of thought, singularity of voice, curiosity and, above all, writing that speaks to the urgency and dynamism inherent in the word ‘heat’ itself.

HEAT will continue to feature new and familiar voices, with the focus thrown sharply on the individual writers featured in each issue. Commencing in February, it will appear in a new, smaller and more intimate format, on a bimonthly schedule, with six issues per year. HEAT 3.1 will include short stories, essays, and poetry from writers including Sarah Holland-Batt, Mireille Juchau, Cristina Rivera Garza and Josephine Rowe.